Macomb Celebrates 40 Years of the Flags of Love

“And here we are 40 years later with 852 flags dedicated to the memory of veterans from Macomb and McDonough County,” he told the crowd that gathered at the Chandler Park gazebo for a brief ceremony on Veteran’s Day.

The ceremony honored the three surviving members of the group that started the display in Macomb:  Leland “Tweed” Mummert, Bill Wayland, and Bob Anstine, who was mayor when the city began flying the Flags of Love.

“I’m proud of this community and the park and everybody for pitching in and making it happen,” said Anstine.  He thought the display might last for a couple years and had no idea it would grow to more than 800 flags.  Anstine, who said he served in the Air Force from 1959 to 1965, called the Flags of Love “an All-American activity.” 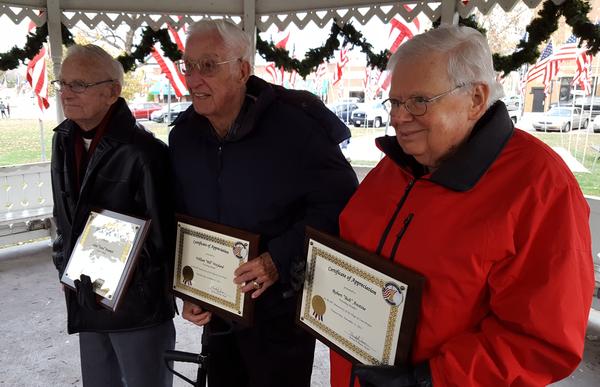 Mummert said the display has always been known as the Flags of Love.

“That's what we fought for, is the Flags of Love.  Now that's what it is. We love our country and that's what the flag represents.  So why not Flags of Love?” Mummert said, who’s a veteran of World War II. He said he comes to the park every time the flags are displayed.

The city flies the Flags of Love five times a year:  Memorial Day, Flag Day, Independence Day, Labor Day, and Veteran's Day.  The red, white, and blue flags fill Chandler Park, which is the size of a city block.  It’s a highly visible location at the junction of Routes 67 and 136. It’s across the street from the Amtrak depot and just a block north of the historic courthouse square.

“The last year-and-a-half we’ve had great support from the community with volunteers coming out on all of the holidays, giving of their time to get this project up (in the morning) and down (in the late afternoon),” said Mayor Inman.

“The city has always been veteran-focused and that’s what this is at the end of the day – a way to memorialize them. I think that’s a good thing.”