Illinois Issues: Local icon shifts from lauded reformer to 'the most dangerous woman in America'

This year is the centennial of America’s entry into World War I. Most stories about the war focus on the fighting overseas, but there was another struggle taking place. An American icon from Illinois helped lead that battle and, for a time, paid for it with her reputation.

Jane Addams was America’s favorite lady around the turn of the 20th Century. The February 24, 1906 San Jose, California Evening News summed it up: “The name of Jane Addams today is known from one end of this vast country to another, and included in that space are thousands of men, women, and children who regard her almost in light of a patron saint.” 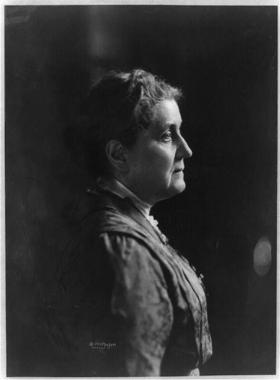 The progressive reformer was beloved for her work at Chicago’s Hull-House, an inner-city settlement where she tirelessly helped immigrants adjust to American life. She topped popularity polls, was awarded university degrees, and was lauded by the press. President Woodrow Wilson sent her 60 roses asking for her support in his 1916 re-election bid, and another bundle when she agreed, according to Louise W. Knight’s biography, Jane Addams: Spirit in Action.

Then War World I broke out, and Addams morphed from American darling to shunned radical. Her sin? Advocating for peace.

Addams’ peace activism was a natural extension of her work at Hull-House. It was a master class in conflict resolution. The community was a hoi polloi of diverse working-class immigrants and middle-class staff, with Addams keeping them all together. “She was achieving international peace every single day on a grassroots level,” says Marilyn Fischer, a professor emerita of philosophy at the University of Dayton who is writing a book about Addams’ philosophy.

“Addams came to understand that if people’s basic needs are met and if they can communicate with each other on a very personal level, that can be reformulated into the workforce, into government, into world peace,” says Harriet Alonso, professor emerita of history at City College of New York and author of the book Peace as a Woman’s Issue.

Her work with labor fed her peace work as well. She saw strikes create long lasting divisions and destroy “people’s willingness to listen to each other,” says Fischer. To Addams, anything that divided people prevented democracy, and nothing divided people more than battle. “War was the enemy of her life’s work,” wrote Kathryn Kish Sklar in the Fall-Winter 1995 issue of Women’s Studies Quarterly.

After World War I began in 1914, she called for mediation instead of battle, and formed peace groups in Chicago. With the assistance of overseas female activists, Addams convened a women’s conference in Washington, D.C. in January, 1915 to gather international support for opposing the war. Three thousand women attended from numerous countries; others were turned away. “What’s phenomenal is these women could not vote. They could not run for public office — they had only their determination and their deep sense of responsibility to do something,” says Fischer.

They created the Woman’s Peace Party (WPP), made Addams the chair and Chicago its headquarters. Three months later, Addams was asked to preside over a meeting of 1,200 peace activists from 12 nations at the International Congress of Women at The Hague. Their goal was to stop World War I and future wars.

They made bold resolutions (opposing nonconsensual territorial takeovers and supporting women’s suffrage, for example) and a bold decision. These women, who had no formal authority, were largely viewed as the weaker sex, and, in some cases, whose brothers, fathers, and sons were fighting each other, decided to visit European and American leaders to lobby for mediation instead of battle.

“Brains — they say — have ruled the world till today. If brains have brought us to what we are in now, I think it is time to allow also our hearts to speak. When our sons are killed by millions, let us, mothers, only try to do good by going to kings and emperors, without any danger than a refusal,” wrote Rosika Schwimmer in the Report of the International Congress of Women at The Hague.

After lobbying European leaders, Addams met with President Wilson several times. She also spoke publicly about her work in Europe, where soldiers told her their battle stories. During a speech to peace activists at New York’s Carnegie Hall, Addams related a story that sparked her fall from grace.

Like many newspapers across the nation, the July 18, 1915 Lexington (Kentucky) Herald covered her talk and included this quote: “The young men in these warring countries say, ‘Ah, the bayonet charge, that is what we dread!’ You know, they make their men drunk before they can get them to charge. They give them beer in Germany, rum in England and absinthe in France. They have to give them ‘dope,’ as the saying is, before a bayonet charge is possible.”

She related soldiers’ comments that they had no quarrel with their opponents and didn’t want to fight. They called the battle an “old man’s war” because only the warring countries’ older, male leaders supported it.

Newspapers attacked her: How could she question the soldiers’ bravery? “It’s been a European tradition for 300 or 400 years to give soldiers alcohol before they have to enter battle, because they know alcohol gives them courage,” says Knight. “Everyone in Europe knew it … in Europe it wasn’t a scandal to talk about it.”

Although most Americans didn’t want to engage in the war, and Wilson was re-elected in 1916 on his promise not to, “there was a lot of militaristic propaganda circulating” between 1915 and 1916, according to Knight. 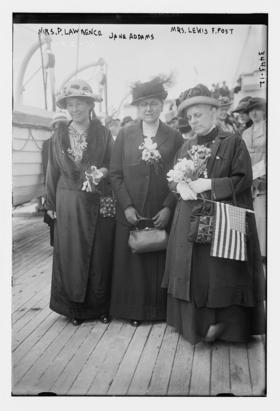 “Of course Miss Addams does not advocate armed intervention,” wrote the July 11, 1915 Morning Star in Rockford, “but to a majority of the level headed people of the United States it is very evident that even a proposal from this government that it act as mediator at this time would not only be received with coldness and rejected, but would not improve our relations with any of the countries at war.”

As the war escalated and America moved closer to joining, the federal government passed laws that restricted dissenters. The Sedition Act and Espionage Act, enacted between 1916 and 1917, prohibited: disloyalty, interfering with enlistment, criticizing the war and America’s preparation for it, and inciting discontent. (While the Threats Against the President Act passed in 1918 was intended to protect Wilson, it was often used to silence war dissenters.)

By April, 1917, when Wilson declared America would enter the war so the world would “be made safe for democracy,” pacifists were the country’s black sheep. One of the blackest was Addams. Even “former Hull-House residents and friends” turned against her, according to the Jane Addams Papers Project.

To Americans, “she was a traitor,” Fischer says, even though “she was very even handed about it. She never said, ‘Rah, rah Germans!’ or anything like that. She said, ‘We have to find a way to negotiate this and bring the conflict to a stop.”

The government surveilled her, the press vilified her, audiences heckled her, organizations refused to let her speak and people sent her hate mail. The Woman’s Peace Party was a target, too. “Addams talked about going to the WPP office and finding feces smeared on the door,” Alonso says.

Addams was shocked. She thought most Americans wanted peace. The Hull-House immigrants told her they fled here to avoid wars in their homeland. Others, like one Rockford, Civil War veteran who wrote her, felt the same. His letter was in the March 30, 1915 Morning Star: “The great peace movement is growing and to make it national is to make war impossible henceforth. …God bless you all in your work for peace, is the prayer of an eighty-year old veteran of ’61 to ’65.”

She became depressed and very ill in 1915 and was often sick for the next few years. Even so, Addams’ drive to help others led her to noncontroversial war work, something palatable to her views and pro-war Americans.

Herbert Hoover was in charge of the U.S. Food Administration, which worked to get food for our servicemen and allied countrymen, who were starving. He asked Addams to talk to women’s groups around the country and encourage them to conserve food, so there would be enough for everyone. Addams did it in her own style. While other USFA speakers said “food will win the war,” Addams talked about helping others. “I read her speeches and it was, ‘We need to change our daily habits of life in the kitchen, in order to form relations of sympathy with the people in need in France, Belgium, and countries that were being hit,’” says Fischer.

After World War I ended in 1918, Addams kept fighting for peace. She became president of the Women’s International League of Peace and Freedom (WILPF), which evolved from the 1915 women’s congress at The Hague. She worked for humanitarian relief in war-torn Europe and was one of the first Americans to enter Germany after the battles because she believed people’s basic needs, especially hunger, had to be met for any hope of peace and democracy, according to Fischer.

Still, her reputation wasn’t redeemed. Instead, it took another hit. When America experienced a “Red Scare” of communists and anarchists in the 1920s, the federal government and other organizations compiled lists of “risky, traitorous” people. Addams was included in some. Knight says these were “smear campaigns” created by people who opposed the reforms Addams and her peers advocated, such as ending child labor and enfranchising women. “These lists were useful in inhibiting the free speech of people who were talking not only about peace but who were just progressive reformers.”

Federal Bureau of Investigation Director J. Edgar Hoover called Addams “the most dangerous woman in America” and began a file on her while investigating the WILPF for treason (view Addams’ file online: https://vault.fbi.gov/Jane%20Addams). The Daughters of the American Revolution kicked her out. In her obituary, the May 22, 1935 New York Times sang her praises, but added: “Her views were sometimes considered dangerously radical. Socialists and other radicals met at Hull House, and her opponents sometimes forgot that her liberal attitude in permitting such meetings did not include a membership in the groups she tolerated.”

Despite the opposition, Addams never rejected her beliefs. She traveled the world on behalf of WILPF and became an “international feminist,” says Alonso, all while continuing to run Hull-House. 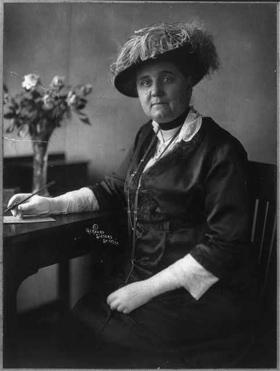 Slowly, Americans’ opinion of her softened. In 1931, she became the first American woman to receive the Nobel Peace Prize. Shortly before her death, First Lady Eleanor Roosevelt held a huge dinner in Washington, D.C. on the 20th anniversary of the WILPF, where she and the secretary of the interior praised Addams’ work and patriotism. After Addams’ death from cancer on May 21, 1935, newspapers around the country commended her, even the Chicago Tribune, which had castigated her during the Red Scare.

Although her peace activism didn’t stop World War I or prevent future wars, it had an effect, experts say. Some of the WPP’s and WILPF’s recommendations ended up in President Wilson’s Fourteen Points — his plan to end the war, and her efforts continue through the WILPF, which still works for social reforms around the world.

Yet, Addams had regrets. After the war she wrote a book, Peace and Bread in Time of War, reflecting on the WILPF’s experiences. “Her analyses are absolutely penetrating,” says Fischer. “Some of them are heart-rending. Everything from questioning herself to questioning Wilson’s leadership abilities … like, ‘What more could we have done?’”

“She never gave up her faith in people or in institutions,” says Alonso. “She believed that people could change them through peaceful, democratic ways.”