Getting Ready for the Solar Eclipse

The upcoming phenomenon in the tri states region won’t quite be a total solar eclipse but it will come close. It will begin late in the morning on Monday, August 21.  At 1:15 p.m. in Macomb, the eclipse will reach its peak when 95.2% of the sun’s surface will appear to be covered by the moon.

Esteban Araya, Associate Professor of Physics at Western Illinois University, said he witnessed a total solar eclipse when he was a young child.

“And far away you can see day time.  It’s a really impressive phenomenon.” 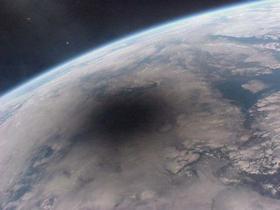 While the August 21st event won’t be a complete solar eclipse in the tri states, some areas of the country will get to witness a total eclipse, including portions of southern Illinois and central Missouri.  And all of North America will witness at least a partial eclipse, which led NASA to nickname the upcoming event, “Eclipse Across America.”

Araya said at least one solar eclipse happens somewhere on Earth almost every year. But they often happen in the middle of an ocean where no one can see them.

“But our understanding of the natural world is amazing. We can predict these eclipses to the second.  This tells us how important it is to understand nature, get measurements, and get facts.”

And he urged people to put down their phones and take in the entire experience instead of trying to photograph it.

Even during an eclipse you should not look directly at the sun.

“Eclipse glasses” should be worn; they should meet the international standard ISO 12312-2, which should be printed on them.  Number 14 welder’s glass is also an option.  It’s the darkest shade of welder’s glass available and the only shade suitable for viewing an eclipse.

A pinhole camera can also be used to view the eclipse.

NASA’s warning is “Don’t be Blindsided.”  Dr. Brigette Colley, an optometrist at Professional Eyecare Center in Macomb, echoed that sentiment.

“The biggest concern is a condition called solar maculopathy.  It’s an actual photo-toxic chemical reaction that burns the retina -- the back of the eye – and particularly the fovea where your central or 20/20 vision comes from,” Colley said.

“It can cause temporary blurriness but it can also cause permanent vision damage or lost or distorted central vision.”