Best-selling author Michael Eric Dyson had harsh words for President Donald Trump as he spoke of the “resurgence” of white supremacy at a Martin Luther King Jr. cultural dinner at Illinois State University on Friday.

Dyson spoke of white privilege in a question-and-answer session with students and faculty, saying the Charlottesville riots and debates over confederate monuments show white supremacy is on the rise.

“I don’t think it dies out with generations, I think it’s recrudescent and resurgent,” Dyson said. “I think it reasserts itself.” 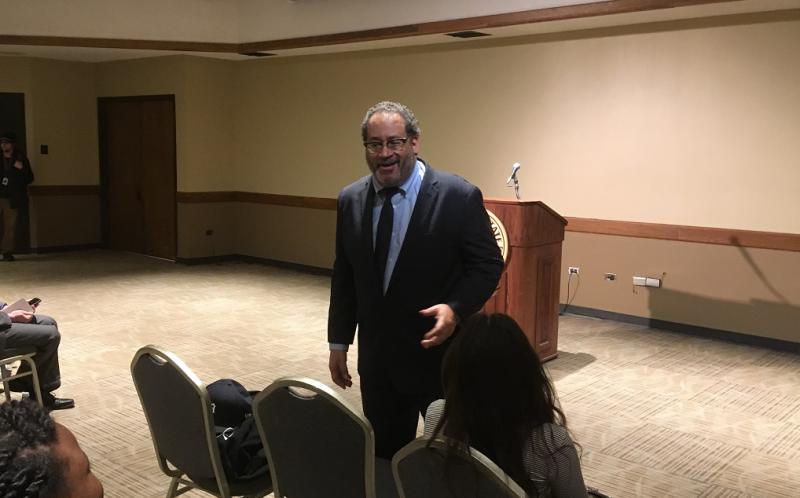 Dyson added there's white supremacy ideology in the White House, though he said Trump isn't smart enough to orchestra such a campaign.

“Donald Trump’s problem is he is attracted to those things which will fuel and foster such horrible and deadly consequences for the sake of political thrill or winning or the narcissism that is white supremacy,” Dyson said.

Dyson cautioned Democrats they won’t beat Trump in 2020 unless they unify behind a candidate.

“They say the left has firing squads in semicircles anyway, they are just killing each other,” Dyson said. “I’m not trying to romanticize the right, but they stick with a dude down in Alabama who is a child predator.”

Dyson added Barack Obama didn't do enough for racial justice when he was president.

“We didn’t expect Obama to be a Black Panther or Martin Luther King Jr., that’s not his role. He’s the president, but most other presidents have had to deal with this issue,” Dyson said.

WGLT depends on financial support from users to bring you stories and interviews like this one. As someone who values experienced, knowledgeable, and award-winning journalists covering meaningful stories in Central Illinois, please consider making a contribution.